You’ve surely heard of the paranormal activity that goes on in the Stanley and the Bourbon Orleans, but have you heard about the terrifying activity that occurs at the Emily Morgan Hotel? Originally constructed in 1924, the hotel has a grim history. The Emily Morgan was originally used as a medical facility, with what is now the main lobby serving as the morgue and the basement housing the crematorium.

With such a dark past, it’s certainly no surprise that specters make their way through the halls and rooms of the Emily Morgan. Guests report that the 14th floor smells of medical equipment and has an “off and unsettling” feeling. The 12th floor houses one of the hospital’s operating rooms, and many guests have reported seeing flashing lights and apparitions in the hallways. While the basement is currently closed to the public, the hotel staff report plenty of unusual happenings, including hearing disembodied voices and smelling burning flesh. If you’re looking for a truly authentic haunted hotel, try staying a night in the Emily Morgan! 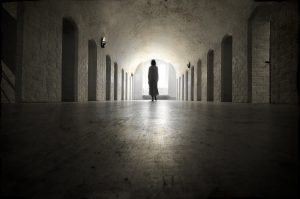 Mental health facilities and state hospitals often have gruesome and horrific histories, and it’s easy to understand why. The treatments used in decades long gone were both abusive and ineffective, and frequently led to unpleasant deaths. Restless spirits allegedly roam the grounds and occasionally make themselves known to the staff members, who readily agree that the hospital is undoubtedly a haunted site. Ghastly figures have been reported in the windows, and employees report seeing moving shadows in the halls.

There isn’t much that is known about this cemetery, except that it was built around 100 years ago. There are a few Chinese gravestones on the right side, and the property is currently owned and in use by a private family. A number of odd occurrences have taken place in the cemetery, including occult conjuring and the practice of witchcraft. These incidents usually occur when the moon is full, so don’t make your way to the cemetery if you see a full moon coming over the horizon. Many people report feeling “off” and “bad” energy as they make their way through the headstones, as if they are being warned by something sinister. Some have even reported seeing a tall, white apparition making its way through the graveyard.

Keep an eye on our blog page, as we’ll continue to provide you with haunting information about some of the scariest places in San Antonio. For an up-close-and-personal encounter with the paranormal, book a ghost tour in San Antonio with RJA Ghost Tours today!